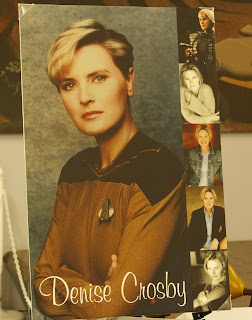 This year was the 65th anniversary of the alleged crash of an Unidentified Flying Object at Roswell, New Mexico. As has been the custom for many years, around the fourth of July, a dual celebration of this event was held in Roswell, one sponsored by the town and the other by the UFO Museum and Study Center.


The Galaxy Fest, the event sponsored by the UFO Museum and Study Center, held its opening ceremonies in the UFO Museum at 9:00 AM, Friday, June 29th. Each year the Museum invites stars from the world of science fiction as well as the leading researchers and authors in the field of UFO phenomenon. Attending this event was Denise Crosby, the actress that played Tasha Yar on the first season of the television program Star Trek: The Next Generation. She signed autographs and talked with the fans of that long running show. 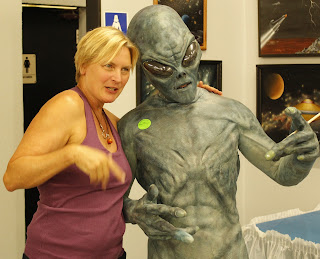 
The event attracted visitors from as far away as Australia and introduced a large number of people to the various aspects of the UFO mystery through displays, books and lectures. As might be expected, the lectures covered the gamut of topics related to the alleged crash of a craft from another planet. Additionally, since UFOs tend to be lumped in with what are referred to as “new age” subjects, there were talks regarding other “new age” subjects that were not directly related to UFOs, such as Freddy Silva’s talk on “The Coding of Earth: Crop Circles, Sacred Sites and the Coming of Human Evolution”. 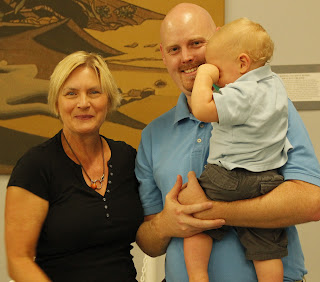 Kathleen Marden, the niece of abductees Betty and Barney Hill spoke on “The E.T. Agenda: Why Don’t they land on the White House Lawn?” and “Captured: The Betty and Barney Hill UFO Experience”. Larry Holcombe spoke on “The Nixon Administration and the TV Documentary UFOs: Past, Present and Future” and “The History of Modern Presidents and the UFO Enigma”. David Rudiak spoke on “The Ramey Memo”. Travis Walton and Steve Pierce discussed Walton’s abduction by aliens which became a book and a movie entitled “Fire in the Sky”. Stanton Friedman, the “rediscoverer” of the Roswell Crash discussed “Man’s Place in the Universe”. Linda Mooney discussed “How to Love an Alien”. Frank Kimbler presented a talk on “Roswell Artifacts”. Diana Perla Chapa talked about “The Mayan Predictions: Extra Terrestrial Input” and “The Mayan Predictions and the Importance of the Pyramid Shape”. Don Schmitt and Tom Carey presented two talks, one entitled “Deathbed Confessions: The Truth of Roswell Finally Revealed” and the other was “Roswell Generals Talk: What They Said Really Happened”. I spoke on “UFOs and the Supernatural”. Paola Harris presented “A UFO Update – The International Perspective”. Kevin Randle presented “Reflections of a UFO Investigator”. Yvonne Smith presented “Chosen: Recollections of UFO Abductions through Hypnotherapy”. Derrel Sims talked about “Alien Implants: New Secrets Unveiled and Cases on the Horizon” and “Who Is the Alien?” K. Lorraine presented talks on the “Lonely Alien” and “The Apple Trick”. Robert Salas presented “UFOs, Nuclear Weapons and Extreme Secrecy”. Jill “Amariah” Mara presented talks entitled “Meet Benevolent Extraterrestrials” and “Telepathic ET Contact”. Tom Kirkbride presented “Science Fiction Heroes and Today’s Politics” and “Freedom and Science Fiction”.

Lest readers begin to think that Roswell is just known for an alleged UFO crash, the area also has a tremendous amount of history. A group of pioneers from Missouri attempted to establish a settlement, called Missouri Plaza, about 15 miles southwest of what is now Roswell in 1865 but were forced to abandon the site because of a lack of water. Cattleman John Chisum had his famous Jingle Bob Ranch, the largest ranch in the country, about 5 miles from the center of Roswell, at South Spring Acres. The first buildings to be established in Roswell were two adobe buildings built in 1869 by Van C. Smith, a businessman from Omaha, Nebraska, and his partner, Aaron Wilburn. The two buildings became the settlement's general store, post office, and sleeping quarters for paying guests.


In 1871, Van C. Smith filed a claim with the federal government for the land around the buildings, and on August 20, 1873, he became the town's first postmaster. Van C. Smith was the son of Roswell Smith, a prominent Indiana lawyer and Annie Ellsworth, daughter of U.S. Patent Commissioner Henry Leavitt Ellsworth. Smith named the town Roswell, after his father's first name.


During World War II, a prisoner of war camp was located in nearby Orchard Park. The German prisoners of war were used to do major infrastructure work in Roswell, such as paving the banks of the North Spring River. Some POWs used rocks of different sizes to create the outline of an iron cross among the stones covering the north bank. Later, the iron cross was covered with a thin layer of concrete. In the 1980s, a crew cleaning the river bed cleared off the concrete and revealed the outline once more. The small park just south of the cross was then known as Iron Cross Park. On November 11, 1996 the park was renamed POW/MIA Park. The park displays a piece of the Berlin Wall, presented to the City of Roswell by the German Air Force. In the 1930s, Roswell was a site for much of Robert Goddard's early rocketry work. Roswell was a location of military importance from 1941 to 1967, at which time Walker Air Force Base was decommissioned. After the closure of the base, Roswell capitalized on its pleasant climate and began to gain a reputation as a retirement community.


There are always questions as to how Roswell became so well known in regard to UFOs, to the following is quick synopsis of the Roswell Incident. On July 8, 1947, the Roswell Army Air Field (RAAF) public information officer Walter Haut in Roswell, New Mexico, and the father of the current director of the Roswell UFO Museum and Study Center issued a press release stating that personnel from the field's 509th Bomb Group had recovered a crashed "flying disk" from a ranch near Roswell, sparking intense media interest. The following day, the press reported that Commanding General of the Eighth Air Force Roger M. Ramey stated that, in fact, a radar-tracking balloon had been recovered by the RAAF personnel, not a "flying disc." A subsequent press conference was called, featuring debris said to be from the crashed object, which seemed to confirm the weather balloon description.


The Roswell incident was quickly forgotten and almost completely ignored, even by UFO researchers, for more than 30 years. Then, in 1978, physicist and Ufologists Stanton T. Friedman interviewed Major Jesse Marcel the former intelligence officer at RAAF who was involved with the original recovery of the debris in 1947. Marcel expressed his belief that the military had covered up the recovery of an alien spacecraft. His story spread through UFO circles, being featured in some UFO documentaries at the time. In February 1980, The National Enquirer ran its own interview with Marcel, garnering national and worldwide attention for the Roswell incident.


Additional witnesses added significant new details, including claims of a huge military operation dedicated to recovering alien craft and aliens themselves, at as many as 11 crash sites, and alleged witness intimidation. In 1989, former mortician Glenn Dennis put forth a detailed personal account, wherein he claimed that alien autopsies were carried out at the Roswell base.


In response to these reports, numerous questions from the media and after congressional inquiries, the General Accounting Office launched an inquiry and directed the Office of the Secretary of the Air Force to conduct an internal investigation. The result was summarized in two reports. The first report, which was released in 1995, concluded that the reported recovered material in 1947 was likely debris from a secret government program called Project Mogul, which involved high altitude balloons meant to detect sound waves generated by Soviet atomic bomb tests and ballistic missiles.


The second report, released in 1997, concluded that reports of recovered alien bodies were likely a combination of innocently transformed memories of military accidents involving injured or killed personnel, innocently transformed memories of the recovery of anthropomorphic dummies in military programs like Project High Dive conducted in the 1950s, and hoaxes perpetrated by various witnesses and UFO proponents. The psychological effects of time compression and confusion about when events occurred explained the discrepancy with the years in question. These reports were dismissed by UFO proponents as being either disinformation or simply implausible. However, numerous high-profile UFO researchers discount the possibility that the incident had anything to do with aliens.


In 1978, nuclear physicist and author Stanton T. Friedman interviewed Jesse Marcel, the only person known to have accompanied the Roswell debris from where it was recovered to Fort Worth where reporters saw material said to be part of the recovered object. Over the next few years, the accounts he and others gave elevated Roswell from a forgotten incident to perhaps the most famous UFO case of all time.


By the early 1990s, UFO researchers such as Friedman, William Moore, Karl T. Pflock, and the team of Kevin D. Randle and Donald R. Schmitt had interviewed several hundred people who had, or claimed to have had, a connection with the events at Roswell in 1947. Additionally, hundreds of documents were obtained via Freedom of Information Act requests, as were some apparently leaked by insiders, such as the disputed "Majestic 12" documents. Their conclusions were that at least one alien craft had crashed in the Roswell vicinity, that aliens, some possibly still alive, were recovered, and that a massive cover-up of any knowledge of the incident was put in place.


Of course there are also an equal number of investigators who believe that until a UFO lands on the White House lawn the entire story is a hoax. The intent of Galaxy Fest is to present the story to the world and let each visitor make up their own minds. Whatever may be the end result, the event is a fun way to spent four days and it gives people the opportunity to meet television stars, well known researchers and authors. As Mr. Spock used to say “Live Long and Prosper!”