An Out Of This World Story 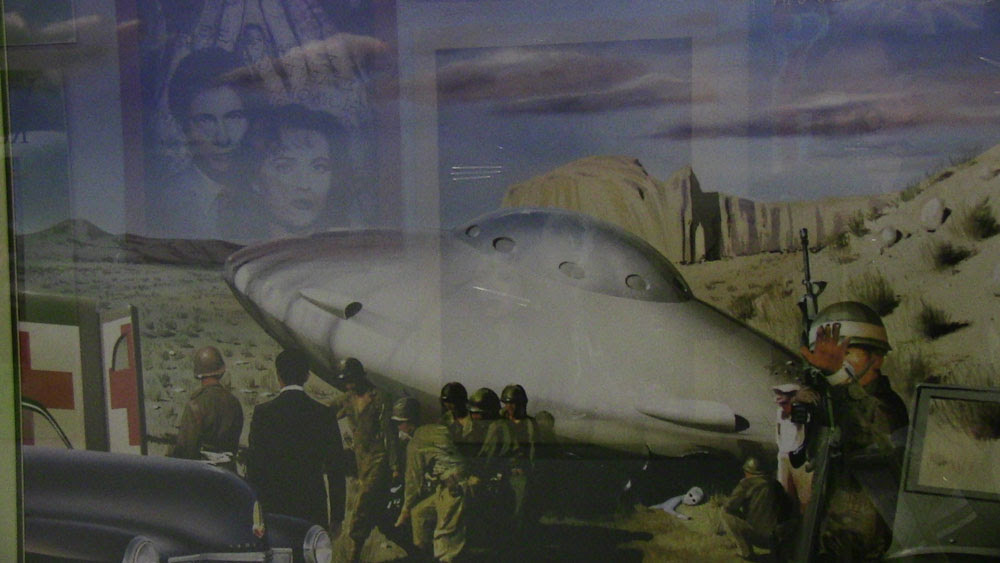 An illustration of the incident can be found at the Roswell UFO Museum. (Courtesy of Roswell UFO Museum)
EL PASO – Rapidly moving and unusually powerful storms do hit the southwest of United States from time to time and one of them struck near Roswell, NM, in the late hours of July 4, 1947.
An aerial craft of unknown design was attempting to cross a rather desolate area some 75 miles northwest of Roswell when it was hit by a powerful bolt of lightning, according to witnesses, and crashed. So began a series of events that have had repercussions to this day.

Interview with Julie Schuster, Director of the Roswell UFO Museum

It should be noted that neither the craft nor the crash went unnoticed. Rancher Mac Brazel heard a loud noise different from the normal sounds of thunder. Two nuns at St. Mary’s Hospital in Roswell saw what they believed was an airplane crash in the distance. The tower at Roswell Army Airfield tracked the flight of the object and reported a “descending flash.” However, at the time no one knew just what had taken place.
The morning of July 5, 1947 Brazel went for the morning inspection of his range. Riding with him was his neighbor’s seven-year-old son, Dee Proctor. To his shock, they came upon a debris field 300 hundred yards wide and ¾ of a mile long. Brazel and his young helper dismounted and began to collect some of the smaller pieces of wreckage and soon filled a sack with what were described as strange pieces of metal.
The following morning Brazel went to see Sheriff George A. Wilcox in Roswell and made him aware of what had taken place. Wilcox, realizing he was out of his depth placed a call to the commander of Roswell Army Airfield, Colonel Blanchard who in turn alerted the base intelligence officer, Major Jesse Marcel. Marcel took a military sedan and followed Brazel out to his ranch. In 1947 over the primitive roads that crisscrossed the area, this was an all day trip so Marcel spent the night at Brazel’s ranch and on July 7, began the initial investigation of the crash site.
Marcel and Brazel spent the morning investigating the debris field and Marcel loaded his car with the strange material found at the site before leaving for town. Before returning to base, Marcel stopped by his home and his 11-year-old son Jesse Marcel, Jr. had the opportunity to handle the odd metal. Later Marcel showed his boss Colonel William Blanchard what he had found.
The military moved fast because the same day, July 7th Glenn Dennis, a local mortician got a call from Roswell Army Airfield asking about the number of child size caskets he had in stock and how soon he could get more. He was also asked how to preserve bodies that had been exposed to the weather. He answered questions as best as he could.
Later than day Dennis took an airman who had been riding a motorcycle and struck a cattle trick to the base hospital and at the emergency entrance saw an ambulance containing some strange items. Curious, Dennis went into the base hospital to see a nurse friend. She reacted strangely and told him to get out of there immediately. On the way out of the hospital he was stopped by military police and told he would die if he told anyone what he had seen.
The next day, July 8, 1947, Blanchard instructed 1st Lieutenant Walter Haut to issue a press release about recovering a flying saucer. At 2 p.m. the press release was issued and the world went nuts. The press release was later labeled a hoax by higher headquarters. That same day Colonel Blanchard sent Marcel and some of the debris to report to General Roger Ramey in Ft. Worth. Ramey had the debris spread out on the floor, sent Marcel out of the room and when he returned the debris he had brought had been replaced with pieces of a weather balloon.
Ramey ordered Marcel not to say a word, called in reporters and told them the weather balloon had been misidentified as a flying saucer.
At the same time, Brazel was held in custody by the military at Roswell and was “convinced” to modify his story to support the crashed weather balloon story. Brazel was not released until the afternoon of July 12th having been held in solitary for three days. Dennis met his nurse friend who drew him pictures of what he had seen on the examining table – a big-eyed alien. She had written down everything she could about what she had seen and heard. Shortly after this meeting, the next day, she was transferred to England and was then reported as having died. Ramey issued a press release to the Associated Press saying that the saucer story was just a weather balloon.
So ended the story of the alien crash at Roswell.
However, in the early 1990’s Stanton Friedman, a well-known UFO researcher and a nuclear physicist became aware of the story and began to investigate. The result was to become one of the best-known UFO events in the world.
Haut and Dennis opened the UFO museum and study center in Roswell. Every July 4 there is a UFO celebration in Roswell and the town is overwhelmed with visitors. This past year the UFO museum reported that more 150,000 persons visited the center, which have been so highly rated that NASA is in the process of lending it numerous artifacts that are integral parts of the history of man’s travels into space.
Did a flying saucer crash just outside of Roswell, New Mexico on July 4, 1947? Has our government conducted a cover up of the real facts for the last 65 years? The jury is still out, but if you have any interest in the question you should go to Roswell and visit the UFO Museum and Study Center.