We Were Not The First


The first story that I wrote that appeared at http://www.borderzine.com was the following.

Did Europeans settle in the Arizona desert thousands of years before Columbus sailed to America? 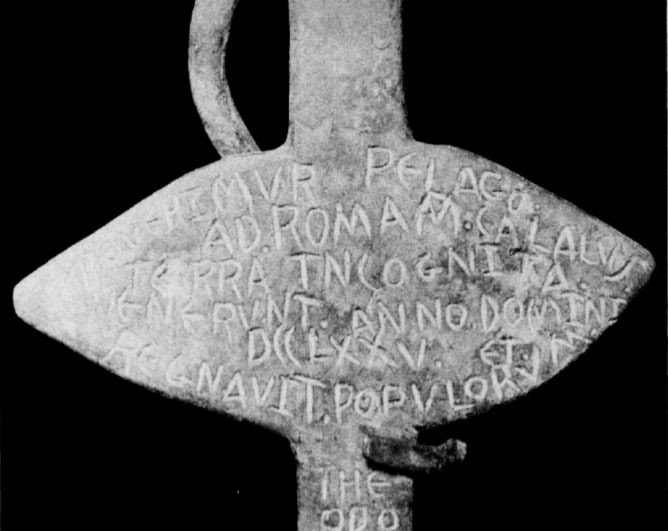 Engraved on the cross found in the Arizona desert c.1922 is the tale that after landing on the coast of the Gulf of Mexico, the Romans marched northwest until they arrived at a desert area near present day Tucson. (Photo from the Desert Magazine, December 1980.)
EL PASO – In our modern world we tend to think of stories of pygmies and giants, dragons and the wee people, hidden treasures and mysterious lost cities as fairy tales and bedtime stories, but these yarns have roots deep in the distant history of the American Southwest.
Almost 500 years before the arrival of Christopher Columbus, Leif Ericson explored the land west of Greenland and established a small settlement. More than 300 years before Columbus landed in Santo Domingo in 1492, a Welsh explorer navigated up Alabama’s Mobile Bay and established European styled fortifications and settlements as far north as the Ohio Valley.
But perhaps even they weren’t the first to come to the new world. Roman Christians may have established a colony on the outskirts of what is now Tucson, Arizona as far back as 775 A.D. Unfortunately, mainstream archeology and academia have dismissed these discoveries as either hoaxes or simply as unworthy of discussion. However, to their chagrin, such unusual discoveries continue to be made.
It might be hard to understand that there have been discoveries that would change the history books and our concept of ancient history, but established academia has gone out of its way to suppress such discoveries. There have been dozens of discoveries that make it very clear that there was once a relatively advanced civilization occupying North America of which only bare remnants remain.
When the European explorers landed on the eastern shores of this great land, they believed that it was untouched by man. Then the explorers met the scattered Indian tribes that inhabited the east. Most of the tribes in North America were small and ill prepared for the arrival of one of the greatest scourges of the old world – the religious zealot. The Conquistadors were bringing the word of God to the heathen of the New World whether they wanted it or not.
The arrival of the Spanish was not an accident; there was a legal basis for their move to the new world. In 1095, at the beginning of the Crusades, Pope Urban II issued an edict, referred to as a Papal Bull.
The first of these Papal edicts affecting the new world was called Terra Nullius (meaning empty land). This Bull gave the kings and princes of Europe the right to “discover” or claim land in non-Christian areas. This policy was further extended in the year 1452 when Pope Nicholas V issued a Papal Bull entitled Romanus Pontifex, declaring war against all non-Christians throughout the world and authorizing the conquest of their nations and territories.
These religious edicts treated non-Christians as uncivilized sub-humans, and therefore without rights to any land or nation. Christian leaders claimed a God-given right to take control of all lands and used these Papal Edicts to justify war, colonization, and even slavery of the people living in the conquered lands.
As detailed by Rick Osmon in Graves of the Golden Bear: Ancient Fortresses and Monuments of the Ohio Valley, by the time Christopher Columbus set sail in 1492, this idea, which was referred to as the Doctrine of Discovery, was a well-established concept.